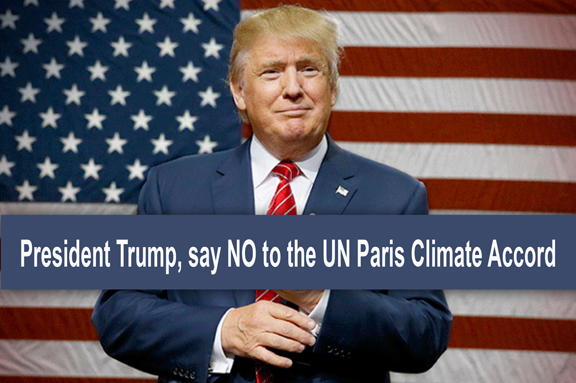 President Trump says “no” to Sustainable Development; the United States pulls out of the Paris Accord

On Thursday June 1, 2017 President removed the U.S. from the Paris Accord that Secrateary John Kerry signed on Earth Day 2016. The accord’s goal was to reduce CO2 to 25% below 2005 levels by 2025. Closely integrated with the Paris Accord are the 17 Sustainable Development Goals offered at the U.N. Sustainable Development Summit in September 2015 in a report titled, Transforming Our World; The U.N. 2030 Agenda for Sustainable Development. The report cited a 15 year action plan to remove poverty in the world. Couched around social justice, the goals seek to transfer wealth ithrough reparations from industriual nations to poor nations.

The American Coalition for Sustainable Communities (ACSC) report, The U.N. Agenda 2030 Agenda for Sustainable Development: A Critique, was sent to president Trump at the White House as an appeal to rescind involvement in the U.N. Paris Accord. Here is the thank you letter we received from the administration.

President Trump, say No to the UN Paris Climate Accord

President Trump, get the United States out of the Paris Agreement/Accord.

The GOP opposes the agenda of Sustainable Development (SD) for good reason. The central theme of this U.N. scheme is social justice, whereby successful industrial nations must pay reparations to third world nations for the sins of the past and future; citizens and residents are deemed too wealthy by U.N. despots. To accomplish the goal of redistribution of wealth under social justice, the U.N. came up with the Paris Agreement: “The U.N. 2030 Agenda for Sustainable Development”. Packaged as a solution to climate change, the accord promotes artificial scarcity under the guise of conservation. It is a behavior modification scheme through social engineering. At its core, it is a worldwide rationing system. The plan reinforces centrally planned socialist goals of using less of everything: less food, less energy, less water, less mobility and less freedom. This agenda will continue to extort money and eventually install a worldwide carbon tax system. The end goal is to change our system of capitalism to socialism.

Treaty language for this collectivist U.N. agenda was left out in order to skirt ratification by the Senate. The document was promoted by President Obama during highly politicized climate change debates in late 2015. He signed it on Earth Day 2016. Currently it is incrementally inching its way into government through agencies. Under agency discretion, it is being installed and codified – all without a vote of Congress or the vote of the American people!

As per a recent Bloomberg article, your White House council and your statements on the Paris Accord are accurate:  “The White House counsel’s office warned Trump administration officials in a meeting Thursday and in a separate memo that if the U.S. stays in the global accord, it could arm environmentalists with legal ammunition for lawsuits challenging the president’s domestic regulatory rollbacks…Trump promised during a rally Saturday in Pennsylvania to make a “big decision” on the Paris accord over the next two weeks. He derided the agreement as a “one-sided” deal that threatens U.S. economic output and will spur the closing of factories and plants nationwide. “We are not going to let other countries take advantage of us anymore, because, from now on, it’s going to be America first,” Trump told the crowd in Harrisburg.”

President Trump, please say No to UN Paris Climate Accord!