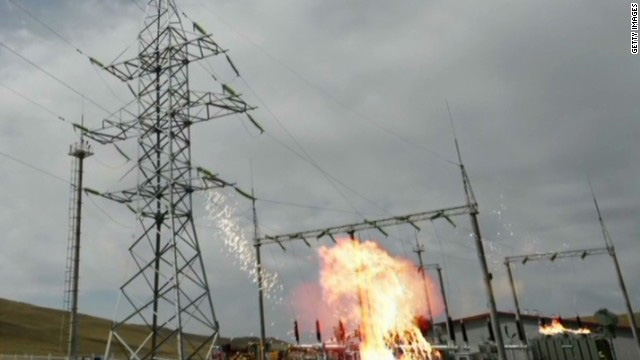 For many years the real goal of “Communities of choice” has been to move the customers of private utilities like PG&E to become customers of government—with government buying the energy for the people.  Then using tax and regulation policy force these companies to close down and sell to government—socialism in a textbook sense.  Thanks to the forest fires, the end of private energy utilities in California could end in the next year or two—then like in Europe and other socialist nations the price of energy will skyrocket and availability very unstable.

“Now comes the Camp Fire, which sent PG&E stock whipsawing this month after evidence of an equipment malfunction near the fire’s point of origin sparked fears the company’s liability won’t be covered by its insurance. Investors were so panicky that Public Utilities Commission President Michael Picker had to step in, pointedly announcing that PG&E’s financial stability was crucial to making the utilities’ equipment safer. Pasadena Democratic Assemblyman Chris Holden even raised the possibility that the Legislature will intervene a second time to help California utilities cope with wildfire expenses.

Watch as the Super-Super Democrat Majority in Sacramento announce they will not bail out PG&E—and then, to “protect” the public, take it over.  The fires give a great excuse to kill off major businesses.

Investigators are massing. Lawsuits are mounting. The death toll in Butte County’s historic Camp Fire stands at 88, so far.

Another year, another megafire, another calamity in which faulty Pacific Gas and Electric equipment is a prime suspect. And once again, Californians face a familiar question: What’s going to happen to the behemoth power company in the thick of the fire zone?

It’s a concern not just for PG&E—one of the largest utilities in the nation—but also for utilities and their customers throughout California. State laws make power companies especially liable for fires sparked by and around their equipment, and California’s fire season is year-round now, thanks to global warming.

Now comes the Camp Fire, which sent PG&E stock whipsawing this month after evidence of an equipment malfunction near the fire’s point of origin sparked fears the company’s liability won’t be covered by its insurance. Investors were so panicky that Public Utilities Commission President Michael Picker had to step in, pointedly announcing that PG&E’s financial stability was crucial to making the utilities’ equipment safer. Pasadena Democratic Assemblyman Chris Holden even raised the possibility that the Legislature will intervene a second time to help California utilities cope with wildfire expenses.

Let’s look at what could happen if PG&E, which provides natural gas and electricity to 16 million people in northern and central California, seeks debt restructuring in the aftermath of the deadliest blaze in state history.

What happens under reorganization?

According to Sacramento-based bankruptcy attorney Steven Felderstein, PG&E would most likely continue with business operations. This means the lights would stay on and utility workers would keep working. But a Chapter 11 filing would allow PG&E to propose a reorganization plan to reduce expenses and free up assets.

Felderstein, who has represented state agencies in bankruptcy courts around the country, said a judge is usually assigned to mediate to get most, if not all, parties to a consensus. The bankruptcy court would then confirm that the plan is feasible, made in good faith and in the best interest of creditors. PG&E would have four months to file a reorganization plan but could get an extension.

Bankruptcy could affect wildfire victims seeking damages because the filing triggers a stay on lawsuits against PG&E. Multiple victims of the Camp Fire have already sued PG&E alleging negligence and health and safety code violations by the utility. That comes on the heels of dozens of lawsuits related to fires in 2017.

“They can ultimately have their claim determined outside of the bankruptcy court, but it still is a claim of the bankruptcy,” Felderstein said. “So if the creditors only end up getting paid a percentage of the amount they are owed, then that would affect the injured parties as well.”

If wildfire victims aren’t happy with the reorganization, it could be that their claims are so large that they can veto the plan. “It isn’t for sure that they’d be able to stop a plan, but obviously there’d be a chance that they could,” Felderstein said.

Michael Wara, director of the Climate and Energy Policy Program at Stanford University, says the state shouldn’t allow PG&E to go bankrupt because it would be expensive for ratepayers to pay back that debt. As it is, the utility already has sought permission from U.S. energy regulators for a 9.5 percent increase in transmission charges due to the higher risk of wildfires. PG&E says that translates to an increase of $1.50 per month for the average residential customer.

“Ultimately, the customers pay,” he said.

That was the case when PG&E filed for bankruptcy during California’s power crisis.

PG&E filed for Chapter 11 on April 6, 2001, when the state was hit with rolling blackouts and market price manipulation. According to the Associated Press, “PG&E, based in San Francisco, began its bankruptcy odyssey with more than $12 billion in debt that piled up as the cost of wholesale electricity soared beyond the retail prices established under a state power deregulation plan introduced in 1998.”

Although the filing did not trigger layoffs, the AP noted that ratepayers were stuck with paying back the bills for years and years. At the time, the rehabilitation was expected to cost customers $6.2 billion to $8.2 billion in above-market prices through 2012. That worked out to about $1,300 to $1,700 per customer.

Loretta Lynch, who was president of PUC when PG&E filed for bankruptcy, said she’d be suspicious about PG&E’s motives if the company were to seek a reorganization. Lynch said the utility’s bankruptcy filing was a strategic choice after failing to escape state regulation and that the company did not really need a lifeline.

“Consumers should be on high alert,” she said

Investors also lost. At that time, shareholders lost out on about $1.7 billion in dividends. PG&E already suspended dividends in 2017 in response to deadly blazes in California’s wine country.

Worry about workers and the environment

Wara says there are other reasons state leaders shouldn’t allow PG&E to reorganize in court. One is that utility workers could risk their pensions. Under bankruptcy, a company can seek to modify labor agreements.

Under last year’s wildfire bill, lawmakers sought to give PG&E’s workers some protection if PG&E filed for bankruptcy. SB 901 includes language that states the PUC will seek a plan that’s “fair and reasonable to affected public utility employees, including both union and nonunion employees.”

Bankruptcy also makes it more difficult for the state to achieve its clean-energy goals. By 2045, the state wants 100 percent of electricity to be powered by renewable resources such as wind and solar, as well as zero-carbon energy sources such as nuclear power.

“Vehicle electrification is going to require a ton of grid investments,” Wara said. “If we have to put those grid investments on our credit card instead of getting a 30-year mortgage for them, we’re going to be able to buy less.”

Wait, why is PG&E in trouble?

The utility is potentially facing billions of dollars in damages as state authorities investigate PG&E equipment as a possible cause of the Camp Fire.

PG&E says it believes the increase in wildfires in recent years is closely tied to global warming, the result of much drier conditions after recent droughts and hot weather. That means a fire can spark anywhere along thousands of miles of power lines that make up the electrical grid, creating a huge liability for the utility.

“California is now experiencing the devastating impact of extreme weather and climate-driven natural disasters, including the massive wildfires that occurred in Northern and Southern California in 2017, and the largest wildfires in California’s history during 2018,” the company wrote to federal regulators on Oct. 1. “Extreme weather is no longer a theoretical issue, it has become the new normal.”

After PG&E reported an outage and damage to a transmission tower in the area where the Camp Fire started, the company disclosed that it had borrowed more than $3 billion under available credit lines, bringing total cash on hand to more than $3.4 billion from just $440 million at the end of September. Those moves have sent PG&E stocks and bonds down on worries the utility can’t meet potential liabilities.

Citigroup analyst Praful Mehta estimates damages from the Camp Fire may reach as much as $15 billion. By comparison, PG&E stock has lost nearly half its market value since the blaze, from $25 billion to $12 billion.

PG&E says it’s uncertain the utility will be liable for any of the damages because the cause of the fire remains under investigation. “It is still very much uncertain what the potential liability could be, if any,” said spokeswoman Lynsey Paulo.

PUC president Michael Picker said he can’t imagine allowing the utility to go bankrupt but he didn’t rule out the possibility of a break up. “It’s not good policy to have utilities unable to finance the services and infrastructure the state of California needs,” Picker said.

Earlier this year, the Legislature made it easier for utility companies to absorb the cost of fire damages by borrowing from the state and charging customers to pay back the bonds over many years. If PG&E were to go bankrupt, it’s unlikely the state would be out any money because customers are on the hook for the bonds. So far, no state-authorized bonds have been issued. The controversial bill, SB 901, covers fires that burned in 2017 and those that start in 2019, but not any for 2018.

While Assemblyman Holden plans to introduce a bill that could expand last year’s legislation to cover this year, it appeared unlikely to change rules that automatically hold the companies responsible for any fire damage tied to their equipment, a practice known as inverse condemnation.

Sen. Jerry Hill, D-San Mateo, who has been a critic of PG&E, said he’s opposed to any bailout. “I don’t want them to go bankrupt either,” Hill recently told CALmatters, “but that may be the only way that we can have a safe utility.”