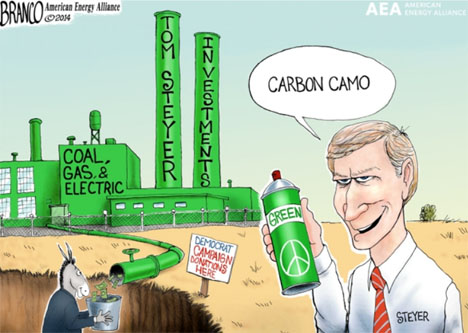 7-29-2016 – With a group of radical Democrat prosecutors and lawmakers waging war on the free-speech rights of climate skeptics, a new report identifies billionaire “green” crony capitalist Tom Steyer (shown) as the chief financier — and financial beneficiary — of the controversial agenda. According to the report, produced by the non-profit watchdog Energy & Environment Legal Institute, the major Democrat donor has massive investments in the so-called “green” energy industry — a sector that is largely dependent on the government subsidies and regulations justified by increasingly discredited climate alarmism. And so, in an apparent effort to protect his investments and extract even more wealth from the public, the crony billionaire has become the largest campaign donor for either political party, dropping around $100 million just in the last two years alone. The implications of what appears to be massive corruption are huge, with a wide array of Democrats across America implicated in the schemes.

The investigative report, Buying the Democrat Party Lock, Stock and Barrel, exposes the political spending of Steyer, a California billionaire who made a big part of his fortune in coal (and still owns lots overseas). In the 2014 election cycle, the billionaire spent some $75 million to oppose political candidates who would not bow to his extreme “green” agenda and help enrich him. In 2016, after a dismal track record in the midterm elections, Steyer reportedly spent about $25 million directly backing alarmist Democrats. And he is apparently plotting to spend yet another $50 million on politicians this year to buy even more support — in addition to another $50 million he plans to raise from fellow crony capitalists seeking to buy themselves more political power and subsidies. The litmus test for politicians who want Steyer’s money is whether or not they support global-warming alarmism and the associated policies that will enrich him… contiune