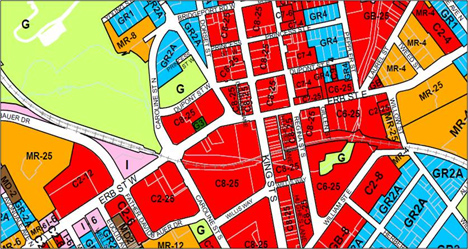 5-4-2016, Dan Titus, iAgenda21.com – The Federal government is seizing control of local zoning. If a city takes grant money from HUD and they do not zone the way the government wants, the Federal government can take over zoning for the city. Say goodbye to local control. This article is an argument that was delivered to the Rancho Cucamonga City Council regarding HUD money. Their decision was to accept HUD money because, “that was they have always done in the past” not realizing that HUD is now enforcing a zoning furl for cities that take HUD money… there are strings attached.

HUD is receiving increasing numbers of third party AFFH related complaints and lawsuits are forcing communities into line. In 2011, HUD charged more cases than in the entire preceding decade. Some of the current administrative actions include these locations:

As elected officials continue to change the culture and ambiance of their cities via the allure of easy grant money, many are learning the hard way, that there is no “free lunch”. Federal agencies are now evoking heavy-handed enforcement power. Jurisdictions’ that do not comply with detailed grant terms and conditions will be forced into compliance through costly litigation. The U.S. Department of Housing and Urban Development (HUD) has a new rule to affirmatively further fair housing (AFFH), which is causing angst. Gone are the days where HUD touted that local communities were better equipped to decide what to do with grant money than the federal government. In place of local decision-making, there is now a HUD supervised data compliance management system that is complex and expensive to implement.

HUD’s Assessment of Fair Housing (AFH) analysis tool basically models information collected from the census and is based on regional goals rather than local zip codes and point systems; therefore, demographics for cities can be compared to cities hundreds of miles away. For example, the city of Dubuque, Iowa, was forced to accept low-income section 8 housing voucher applicants as per the point system they established. Dr. Stanley Kurtz writes in a January 2016 article published in the National Review: “Although HUD’s rules ostensibly allow localities to craft their own housing priorities, Dubuque’s point system was deemed unacceptable by HUD. The feds undertook a review of Dubuque’s housing policy that effectively treated the city as part of greater Chicago, effectively treating Dubuque and Chicago as part of the same “region.”

Furthermore, AFFH redefines “fair housing” to include proximity to transportation, jobs, and schools. This will effectively extend the power that HUD now exercises over housing policy to nearly every other aspect of local development and planning. Under AFFH, once a town takes HUD money, it effectively loses control not only over housing but schools, zoning, transportation, the environment, and business location. In the end, the cowed elected officials of Dubuque signed a “voluntary” (in truth, forced) consent agreement that effectively ceded control of the city’s housing policy to HUD for at least five years – “If you take their money, you play by their rules.” 13

HUD to the Rescue: We Are Here to Help

n a press release dated July 8, 2015 HUD announced the final rule on affirmative furthering fair housing (AFFH) – The U.S. Department of Housing and Urban Development (HUD) announced a final rule today to equip communities that receive HUD funding with data and tools to help them meet long-standing fair housing obligations in their use of HUD funds. 10

In a press release dated, April 23, 2015, U.S. Congressman Paul A. Gosar, D.D.S. (AZ-04) released the following statement after introducing the Local Zoning and Property Rights Protection Act which would prohibit the Department of Housing and Urban Development (HUD) from implementing a new regulation known as Affirmatively Furthering Fair Housing (AFFH):11

“In a July 16, 2013 speech for the NAACP, HUD Sec. Shaun Donovan made it clear; HUD will be “stepping up fair housing enforcement.”70

As noted earlier, as per HUD’s press release, says it “will assist recipients to adjust their land use and zoning laws to meet their legal obligation to affirmatively further fair housing.”71

The “legal obligation” HUD refers to is the applicants’ agreement to affirmatively further fair housing. But the wording is trickier than in the past. The specific clause reads…

Your jurisdiction agrees to “take no action materially inconsistent with its obligation to affirmatively further fair housing.”

“Sets the stage for a false claims lawsuit against fund recipients.”

These actions can be “likened to the bases for False Claims Act lawsuits filed by the U.S. Department of Justice.”72

HUD lawsuits are real and growing.

Before the New York court even announced their August 2009 Westchester settlement, HUD had already begun a compliance review of Marin County for failure to affirmatively further fair housing.73

Like Westchester County, Marin was another tony community with 80% white population and HUD decided it needed integration.

After a year, legal notices and negotiations, the community acquiesced to sign a Voluntary Compliance Agreement.74 Among other stipulations, Marin agreed to…

“On an annual basis for 5 years, Marin must provide HUD a report on the minority attendance at public meetings including the time and date, location race and ethnicity of attendees.75”

“…undertake actions that would lead to the County’s Board of Supervisors declaring it is the policy of the County to encourage private developers to undertake analysis of expected participation rates, and to affirmatively market to those protected classes including racial or ethnic minorities…”76

When a grant recipient fails to affirmatively further fair housing, HUD can respond with a compliance review, loss of the grant money or lawsuits. Third parties can initiate lawsuits, as can the very same people you invited to participate in your community’s Fair Housing Assessment.

Here is an example:

In August of 2015, a developer proposed building 69 affordable housing units for the New Towne development in Rockford, IL. The town council, county board and the public voted to build 49 instead. The developer redrew his plans in a way that guaranteed the plans would advance, in spite of community opposition.

Community members had witnessed high crime rates with previous public housing projects and were not anxious to repeat the problem. A rowdy town meeting followed and the vote was postponed. Two weeks later, the town voted for the smaller number of units.77

Less than 90 days later, the town received notice of a HUD compliance review. In it, HUD alludes to the comments made at the town meeting that triggered the investigation.

Rockford was threatened with a civil rights investigation, possible failure to affirmatively further fair housing and told that any violations of the Fair Housing Act relative to land use or zoning laws would be reported to the Department of Justice.78

Under pressure, public officials did an embarrassing turnaround, caved to HUD and reversed the community’s vote.”79

Affirmatively Furthering Fair Housing (AFFH) has been a HUD provision since 1968 as has the obligation to further the provision.  However, it was weakly enforced. The 2015  ruling called AFFH, used the False Claims Act suits,  initiated by community groups, to hold communities accountable.

Note: The following citations as per the book Agency Tyranny: John Anthony, available for in PDF format @ sustainablefreedomlab.org