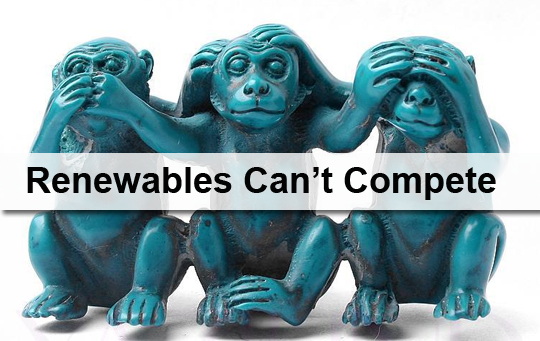 Climate politics is riddled with absurdity.

First, the New York Times reported “that the solar industry employs far more Americans than wind or coal: 374,000 in solar versus 100,000 in wind and 160,000 in coal mining and coal-fired power generation. Only the natural gas sector employs more people: 398,000 workers in gas production, electricity generation, home heating and petrochemicals.”

The Times would have us think this is a plus, but as CFACT’s Paul Driessen writes, “the job numbers actually underscore how wasteful, inefficient and unproductive solar power actually is.”

“Coal generated an incredible 7,745 megawatt-hours of electricity per worker; natural gas 3,812 MWH per worker; wind a measly 836 MWH for every employee; and solar an abysmal 98 MWH per worker.”

Second, an installation of wind turbines three miles off the coast of Block Island, R.I., “is currently generating enough electricity to power 2,000 homes, but building the five turbines cost $300 million. That’s roughly $150,000 per household just to build the turbines, not to operate them.”

Third, a left-wing lynch mob has gathered to stop Bret Stephens from questioning the prevailing dogma on climate in his column in the New York Times.  Climate campaigners have actually been canceling their subscriptions!

What did Stephens write that was too hot for Times readers to handle?

“Ordinary citizens,” Stephens opined, “have a right to be skeptical of an overweening scientism.  They know — as all environmentalists should — that history is littered with the human wreckage of scientific errors married to political power… Claiming total certainty about the science traduces the spirit of science and creates openings for doubt whenever a climate claim proves wrong… Demanding abrupt and expensive changes in public policy raises fair questions about ideological intentions. Censoriously asserting one’s moral superiority and treating skeptics as imbeciles and deplorables wins few converts.”

A staggering fortune is being transferred to the wind and solar industries through the involuntary marketplace of climate policy.  The people cashing in want this cash to keep flowing at any cost.  These carbon profiteers fund and foment an army of “useful idiots” to attack efficient energy, demand more cash for their projects, and intimidate and silence anyone with the temerity to correct the record with facts.

Energy policy should be based on price and efficiency.

Absurdity is no substitute.

For nature and people too,