This special report exposes collectivist-style organization in San Bernardino County, California. The report is authored by the American Coalition for Sustainable Communities (ACSC) whose mission is “Sustaining Representative Government”, which is being usurped and abdicated away to unelected regional boards, bodies and commissions. This report is the result of case study realized by ACSC.

This report is a critical review of some of the elements and regional goals, (see elements and goals below) of the San Bernardino Countywide Vision Plan. Specifically, the education, environment and water elements are addressed, as well as the cradle-to-career regional education goal (Common Core). There is added emphasis presented regarding the water crisis in California. Also discussed are programs under the umbrella of the Countywide Vision Plan. Some of these programs support elements of the plan, such as habitat preservation and water conservation. A County sanctioned nonprofit fundraiser is discussed. A wrap up is presented identifying some of the potential pitfalls of the plan along with prospective solutions. Finally, the Appendix offers common answers about the Common Core education standards by Dr. J. David Lehman.

A few years ago, the county quietly embarked on a regional sustainability plan, which denotes: sustainability, public-private partnerships, cradle-to-career education, and social justice. Regionalism is control of our cities and counties through grant terms and conditions. The federal government uses transportation funds as leverage to institute agency rules under the executive branch of the president. All the president has to do is issue an executive order to an agency and the agency will then create rules.

Sustainability or Sustainable Development is government created resource inventories (water, land, energy) to create artificial scarcity under the guise of conservation. It is basically, a rationing scheme implemented through public-private-partnerships, which is crony capitalism: where business is in bed with government, profits are privatized and losses are socialized on the backs of tax payers. It is a collectivist behavior modification scheme to increase the cost of living for all citizens and residents in the city; thereby forcing the reduction of use of resources. It reduces the standard of living and lifestyle choices through centralized planning.

Listen to the Preface

What appears to have started out as an idea to curb corruption in San Bernardino morphed into a collaborative centralized plan. The collective goal of the Countywide Vision Plan can be summed up in this statement:

“Recognizing the constraints declining revenue has placed on governments; we must build new, and expand existing, partnerships among public agencies, businesses, and nonprofit and faith-based organizations. We must set goals for the county and region that look beyond our individual interests.”

In essence, the County has signed on to restrictive conservation – forced rationing – of assets like land and water to get a gold star on grant applications at the expense of cities in the County.

Initial funding for the plan was $300,000: $50,000 provided by SANBAG and $250,000 provided from the county general fund.  The plan introduces ten elements and two regional goals to promote social equity in the county. In lieu of our representative voting process, a survey was conducted to include citizen and resident input for the plan. 3,656 responded. The total population for San Bernardino County in 2010 was an estimated 2,000,000, which means that 0.18% of the total population in the county participated in this “representative” survey. Cities in the county opted in to the plan via a nonbinding resolution.

According to the County: “The element groups are made up of volunteers. There is no one who picks and chooses who can or can’t participate. The discussion leaders for each element group either naturally emerge from or are appointed by those who volunteer to participate. The element groups don’t report to anyone in the sense that they are held accountable for their performance. Representatives of the element groups meet once a month to discuss their progress and look for opportunities to partner with each other on projects. Staff from the County Administrative Office moderate the meetings. Please keep in mind that neither element groups nor county staff have the ability to create policy or initiate and execute the spending of public money. Only elected bodies meeting in public with advance public notice can do that. And element groups have no more ability to recommend policy to elected bodies than you or any other member of the public.” 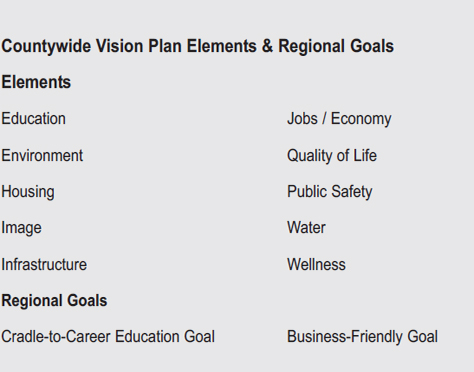 All cities in San Bernardino County need to rescind their Countywide Vision resolutions. Cities opted in on a simply nonbinding resolution. They can simply rescind the resolution. 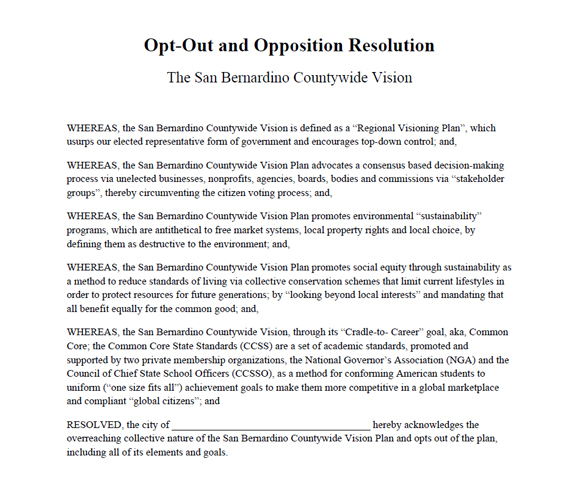 The following groups have signed the Opt-Out and Opposition Resolution: